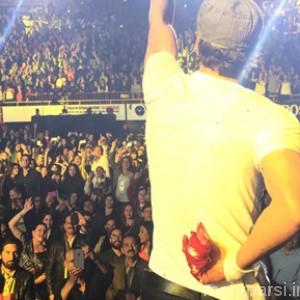 In this photo provided by Francis Ramsden, Enrique Iglesias performs while holding his bloodied and bandaged right hand behind his back during a concert in Tijuana, Mexico on Saturday, May 30, 2015. A representative for the singer says in a statement to The Associated Press that Iglesias was “semi-treated” offstage after his fingers were sliced when he grabbed a drone during the concert. (Francis Ramsden via AP)